Commissioned by Manhattan School of Music

”The waters of the river have a saffron and sickly hue; and they flow not onwards to the sea, but palpitate forever and forever beneath the red eye of the sun with a tumultuous and convulsive motion. For many miles on either side of the river’s oozy bed is a pale desert of gigantic water-lilies. They sigh one unto the other in that solitude, and stretch towards the heaven their long and ghastly necks, and nod to and fro their everlasting heads. And there is an indistinct murmur which cometh out from among them like the rushing of subterrene water. And they sigh one unto the other.”

At first, I was solely attracted to this descriptive opening paragraph of Edgar Allen Poe’s “Silence – a Fable” (1837). Here, an ordinary landscape is twisted into a graphic scene in motion. For me, this was to be translated into working with ordinary instruments in unusual ways. Searching for new sounds and stretching the techniques allows a sense of freedom for the composer and also the performer. This all lends itself naturally to the timbral transitions between sounds, of which the piece is built. A certain newfound technique develops minimal “noise” material into rhythms or something familiar, but only for an instance until it quickly vanishes.

Encompassing a broader sense of the actual absence of sound, I attempted to apply something similar to Poe’s philosophical use. Poe’s duality of “chaos and silence” and in particular, the absence of chaos was to be explored. Besides the few instances of actual silence, I was more focused on the tension created by alternating between moments of static, or minimalist sections, with music of constant development. There is nothing we can do but listen in isolation. Anything can happen. Delicate, violent, familiar, or unexpected sounds arise with a continuity of varying durations.

The piece starts with a delicate hairpin gesture, which becomes the basis for the whole piece. These figures imitate the natural phenomenon of sound in space, which comes from nothing and eventually dissolves to nothing. These hairpin gestures dominate throughout, with the larger hairpins defining sections and the largest single shape ultimately running through the whole piece. These figures are always meant to have some kind of vocal implication, with the crescendo asking a question and the response mirroring with the decay of each sound. Some kind of silence always frames the gesture immediately reminding us of the absence of chaos. Visually even the conductor’s role was taken into consideration, beating through the silences at the opening and the long static sections of the piece. Time is built on silence. But as time passes, silence allows us to recognize for a moment, that there is neither quiet nor silence. 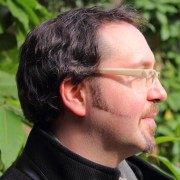